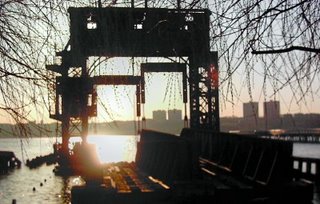 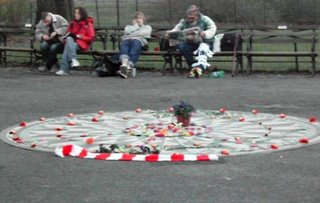 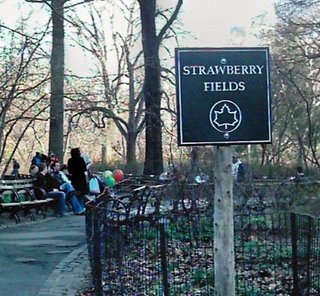 The continuing rambles (literally) of a Scotsman in New York...

Midweek, and another day in the city. The original plan was to do, I guess, what everyone else does. The tourist trail. With guidebook tucked in my jacket inside pocket, I left Plainfield NJ early in the morning. Browsing through it on the train, I began to feel that I may want to explore my own trail. Oh sure, the Museums and sights of New York City are a marvellous thing, but I just felt I would prefer to see where the day would take me instead, see where New Yorkers, live, eat, work, socialise, instead of the usual sightseeing.

After a trip to my usual fave Diner with the rather sensational Polish waitress, I set off for the East River, a part I had rarely explored. I really was going to use up some shoe leather today.

In and out of little communities, backstreets, and eventually I cut across town to the West Side of Central Park, as I wanted to visit Strawberry Fields once again. It doesn't matter what day, weather, time of year it is. There is always someone there, there are always people sitting around the memorial, always someone playing a guitar, Lennon and Beatles songs of course. And all this just a stones throw from, and under the imposing shadow of, the Dakota building just across the road. What struck me though was the age range of the people doing just that. Many could not have even been born when John Lennon died. But there they all were, sitting, thinking, contemplating.

I cut through to the Hudson River, as I wanted to walk down the West Side of the river, something I hadn't done before. This was fascinating. Still derelict buildings from the age of when huge cruise ships steamed into the city, lay empty, dry docks rusting, but it was a great sight, a snippet of the past. Further on, it became the 'Hudson Riverside Park' which is possibly an exaggeration, as it was newly paved with just a few trees dotted around, but pleasant it was, with many benches there for people to sit quietly as the sun went down over the Hudson, whilst looking across at Hoboken, on the other side. I did just that.

There were no tourists here, just locals on their way home from work, office workers taking a break, and an obscene number of joggers. Running everywhere at such a speed.

Cutting back through, night was falling, so I headed for the lights of Broadway, had a coffee amongst the excited chatter of a busy cafe, and strolled through Midtown. All in all, this was the best way, I think, to see New York. Tourist sights ? Well, maybe next week, before I return to AZ towers.